a tale of a wall tent

I haven't done much quilting this summer, but I do have a sewing project to share.

Firstly - hubby has *always* wanted an old-fashioned ''wall tent''.  You know, the kind you can put a wood stove in and actually walk around in?  Well, his boss had an old one, and got a new one just recently (smaller and easier to set up).  So, Brian asked what he was going to do with the old one........  so, they did some 'horse trading' - and we got the tent for some mending work on some clothes his boss needed and a big bottle of whiskey.  Not a bad trade I must say!

This was what the tent looked like when we first got it set up: 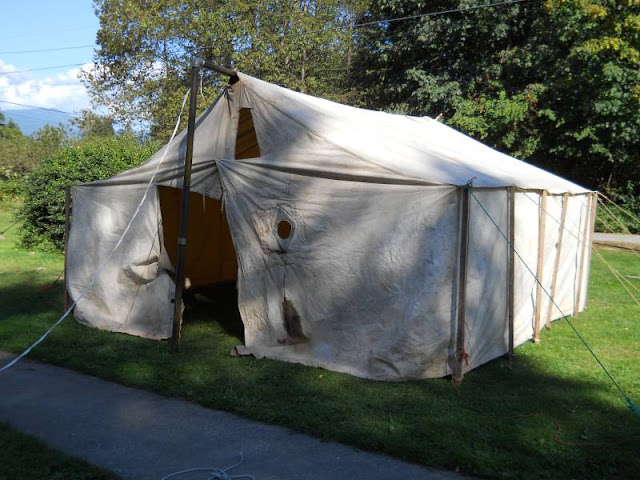 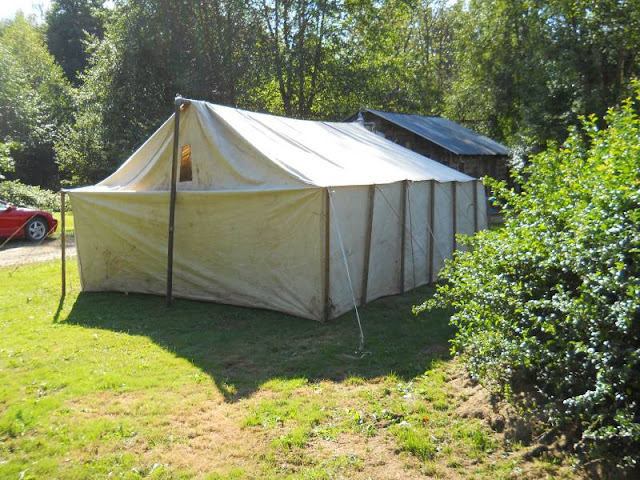 To say it needed help was an understatement.  The legs on the ridgepole were too short so the peak wasn't high enough (thus the strange wrinkle).  The ridgepole/legs were also 2" pipe and were SUPER heavy.  Too heavy for hubby and I to wrangle by ourselves really.

So, first thing we did was buy new smaller diameter pipe, and at less than half the weight, it was a dramatic difference. 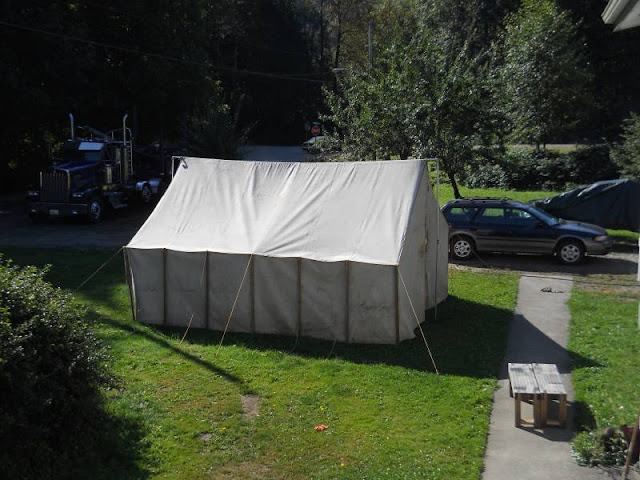 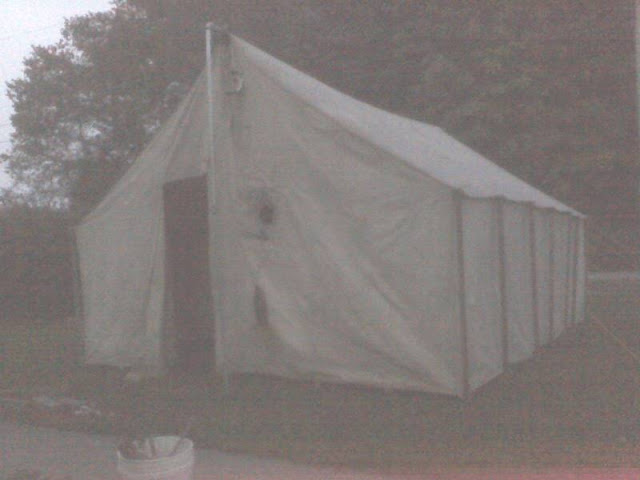 Hubby and I talked about putting a divider in it.  Because it was HUGE.  14'x18'!  He worried that when we camp in it for hunting in November that it would be too big to heat for just the two of us.  I had some canvas, barely enough for a divider, so I borrowed my brother's heavy duty industrial machine.  Not a fancy one mind you, but it has dual feed and is meant for this type of sewing that I'd hate to even attempt on my Pfaff. 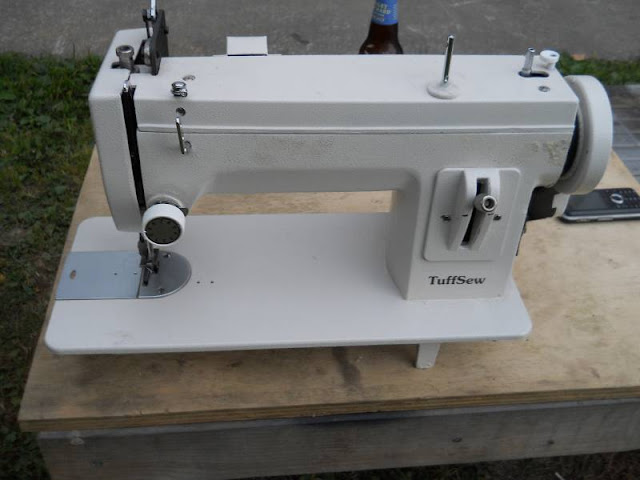 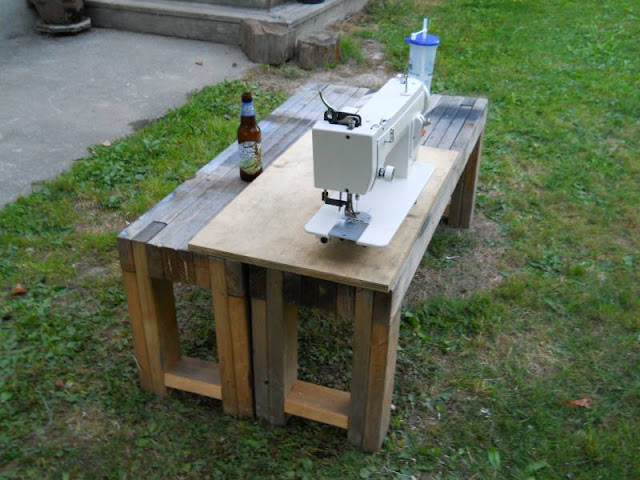 Then hubby got the CRAZY idea to make the whole tent smaller!  EEEEEK.  Yes, I freaked out a little.  I whined, I complained, I resisted.  But, resistance is futile when a hubby has his mind made up!

So, we took the tent down.  It had 6 widths of canvas sewn together, so he decided to remove 2 of them, which would make the tent 14x12.  So, he removed the end of the tent about 4'' from the rear seam, then just on the front side of the 2 back panels. 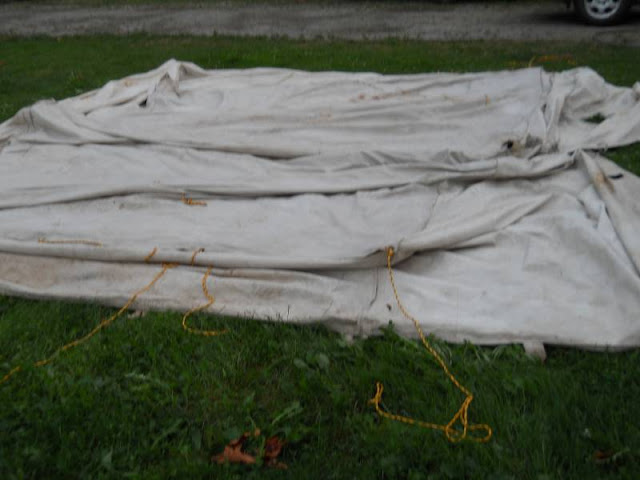 I put right sides together, and did a felled seam so there was no raw edges.  Here I was replacing zippers in the 'vents' that someone made along the tents journey (there was one in the upper peak of both front and back walls).  They put in ugly orange garment zippers that were in pretty bad shape.  I replaced with heavy duty outdoor zippers with nice big chunky plastic teeth, they should last the rest of the tents life. 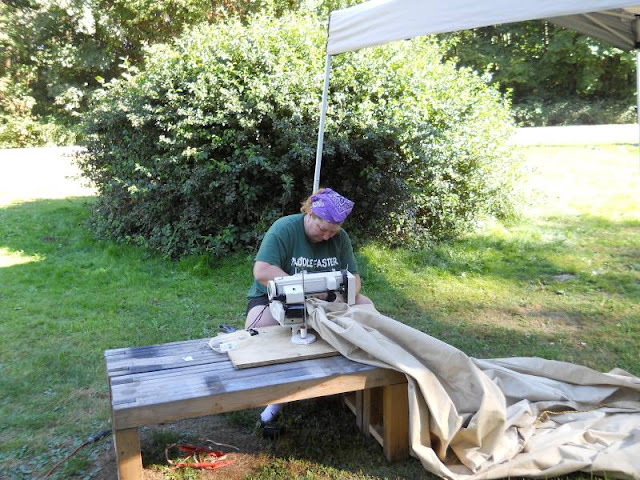 Hubby helped guide the fabric when I sewed the two parts of the tent back together, and it actually worked better than I thought it would.  I was pleasantly surprised and am SO relieved that it worked out and it's DONE. 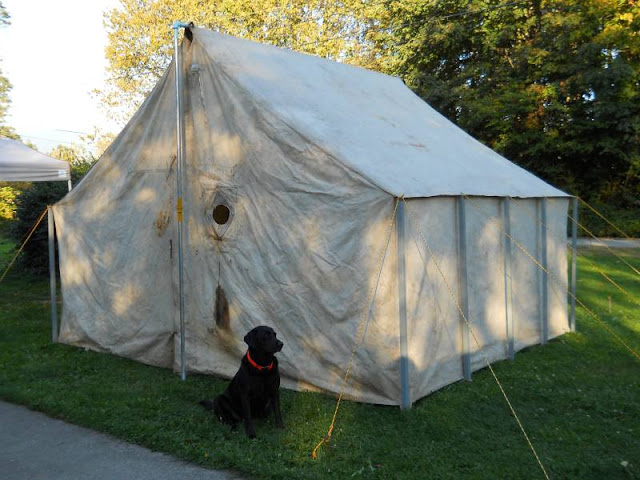 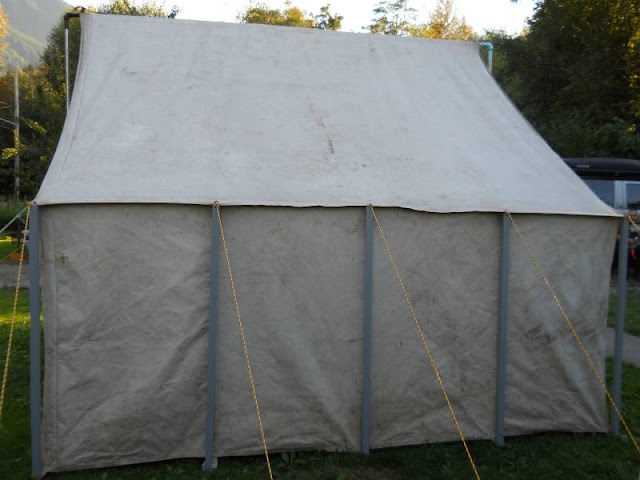 Here is the seam from the outside: 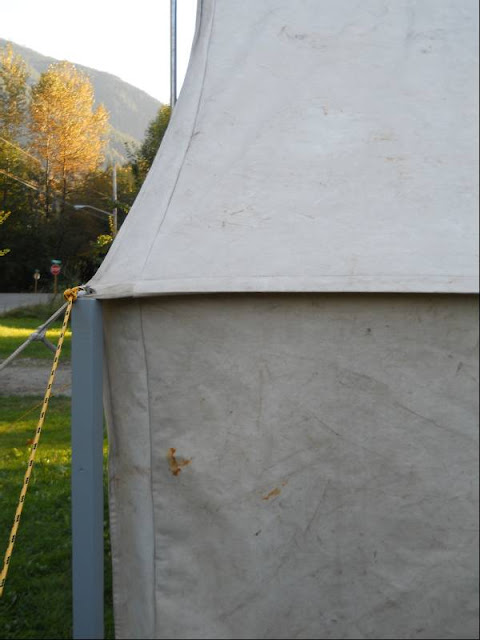 Inside view from the doorway: 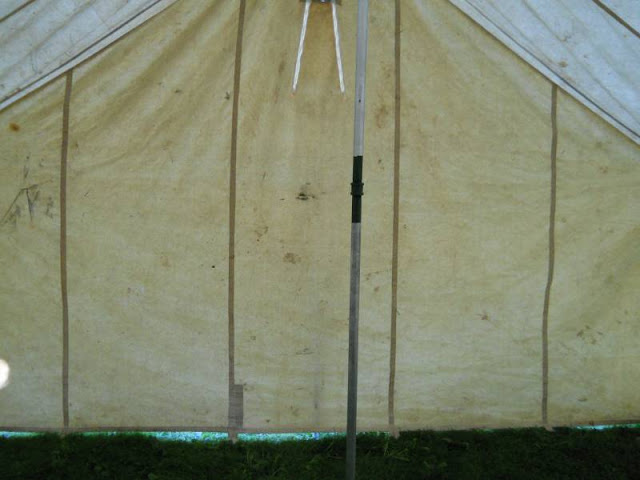 Here is the seam from the inside: 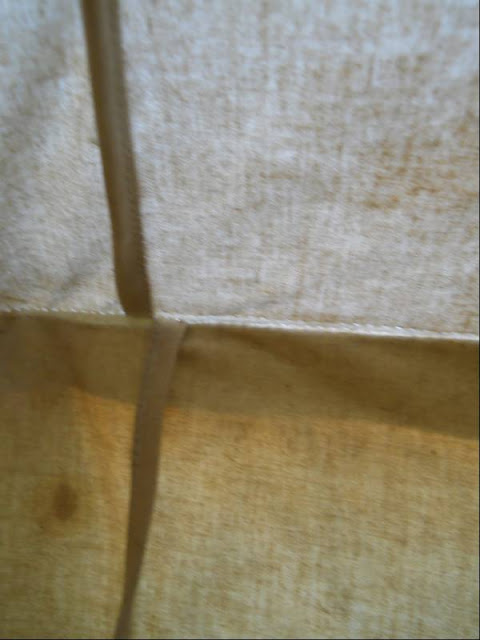 inside view from the rear corner: 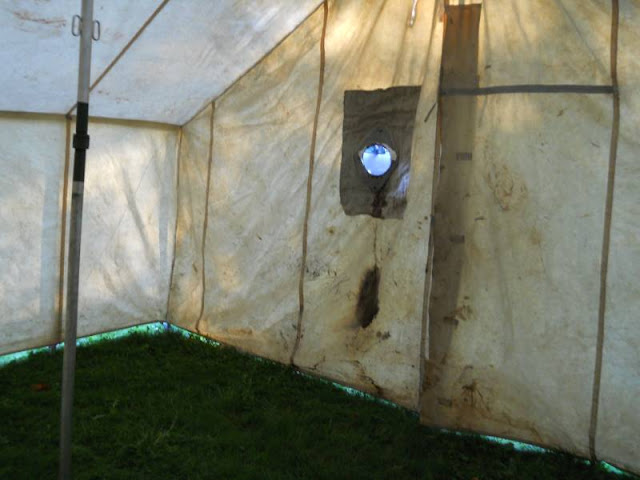 So, now all we have to do is install a zipper on the doorway (it overlaps has ties and velcro, we want a zipper)...... and the zipper has been ordered and is on it's way (has to be a separating zipper as the top of the door already has a zipper).

I also have on order some seam sealer for the seam I stitched, and I plan to use the leftover canvas that we removed from the tent to make a bag for it.  Then, we'll just have to locate (or build) a woodstove and we'll be ready for winter camping!

We have 3 small plum trees - they are small trees, but hubby has always trimmed them way back in the spring so we rarely, if ever, get fruit.  This year, he only did a light trimming on two of them, and we have LOADS of fruit on those 2 trees.  One tree isn't very healthy, so the fruit isn't as healthy looking either.  And the one he did trim all the way back has no fruit, but the one tree that was lightly trimmed and is healthy, has buckets of fruit........ 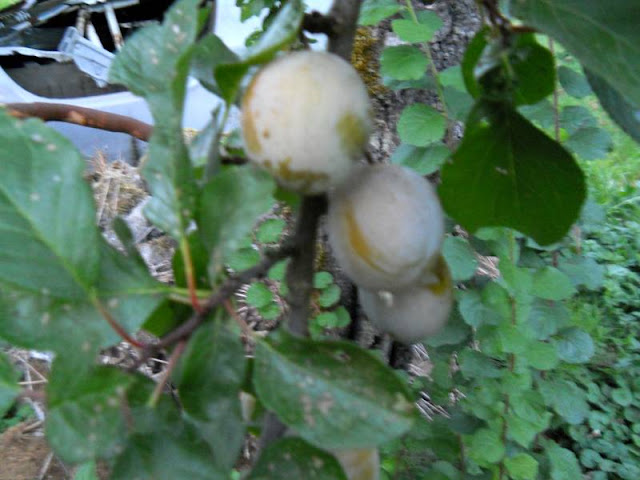 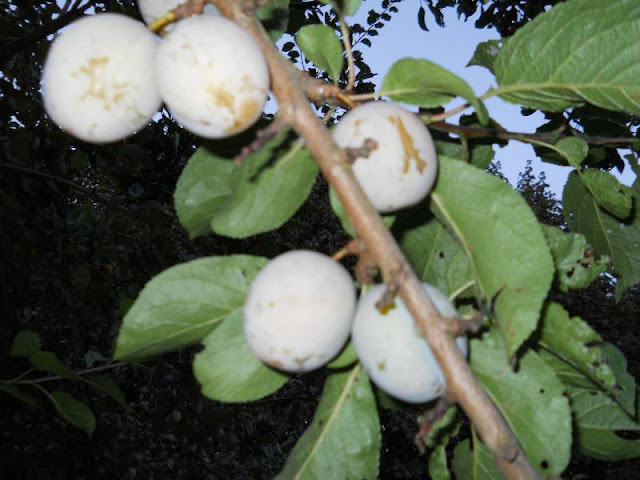 I had to do a little research to see if they were even GOOD.  I am allergic to cherries, so I was a bit apprehensive to try them.  Good news, I am not allergic to these and they are pretty good!  I found out that they are ''Greengage'' plums.  They are meatier and a little less sweet than a black plum.  I decided they would probably be really good dehydrated!  So, I picked a big bowl: 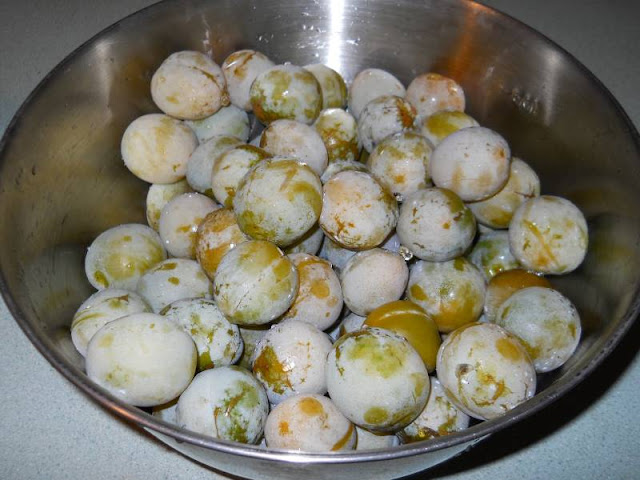 Cut them in half and removed the pit: 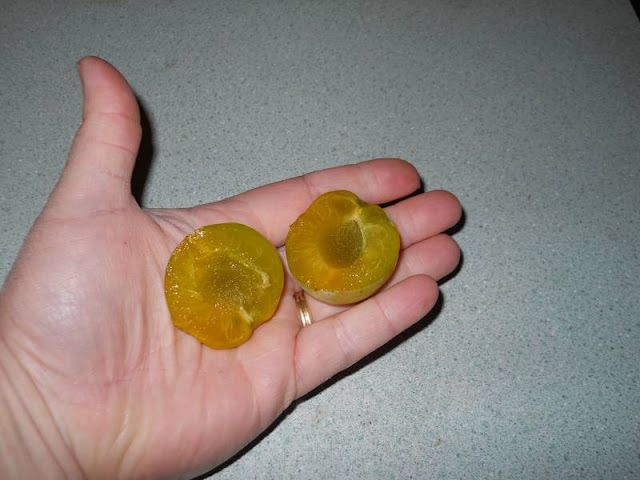 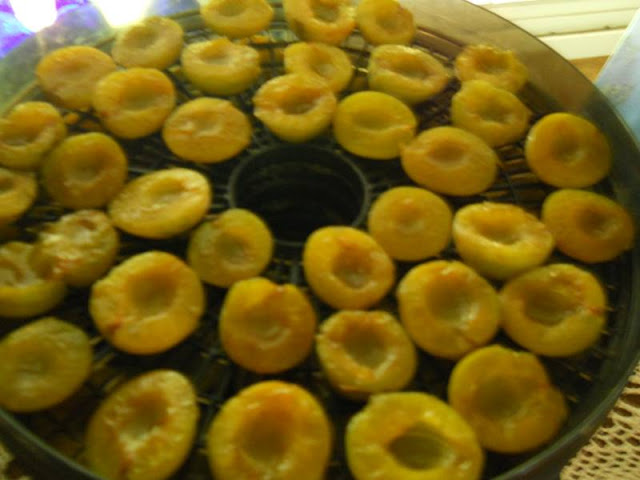