Ya doc, I'm not sick AGAIN after being sick in January - I'm STILL sick SINCE January......

Yesterday I did a huge grocery run (I actually made a week-long menu, and a grocery LIST, which is amazing for me!), and now I am SO glad I did all that shopping because I am in no way feeling well enough to do it now........  I came home and unloaded those 500 bags of groceries and then hit a brick wall......

I have been dealing with bronchitis/flu/ickiness since January.  I was on antibiotics in January, but they didn't help.....  so, after the brick wall last night, I knew I had to go back to the doctor.

It's what I feared - pneumonia.  Not bad enough for a hospital stay, but bad enough for Prednisone and Doxycycline, ick.  I am not looking forward to the side effects of those...... 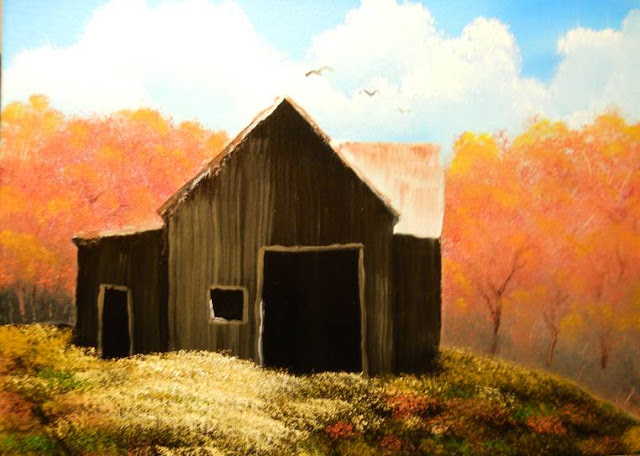 and so I don't have a post w/o any pics, this is the most recent oil painting my hubby did.  Don't you just love the colors?  It's really scrummy in person :)  The trees look a little more reddish in person and the sky a little more aqua-ish :)  He plans to let it dry and then work a piece of  'equipment' in there somehow - an old tractor or old farm truck or something :)

It's finally time to share my latest Moda Bake Shop project!  I call the pattern ''Labyrinth'' - and it was done in the collection ''Noteworthy'', so this quilt is ''Noteworthy Labyrinth'' 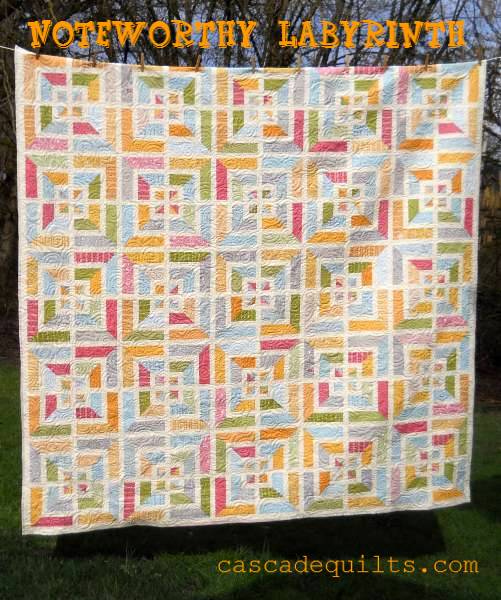 before it was washed 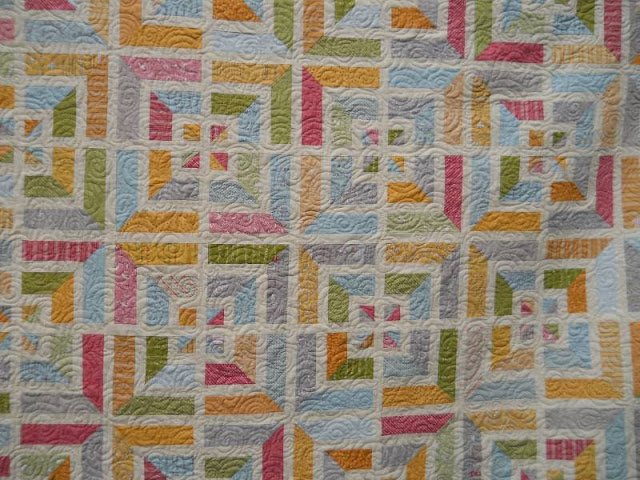 This really was a lot easier than it looks - there are a lot of seams, but it was pretty easy piecing thanks to strip set piecing :)

An interesting thing I found out about quilts - is that they do shrink more than I thought...... about 10% shrinkage with this quilt.  A lot of the shrinkage might just be the batting though - I did use cotton batting whereas I usually use Warm&Natural or Warm&White,,,,,, which is cotton, but not 100% like I used this time.  The pieced top was 87''x87'', then the quilted top was 85''x85'' - then the washed quilt was 79.5''x79x5''!  I will definitely have to remember that if I want to make a quilt a certain size - to make it 10% larger initially to allow for shrinkage :)  I will have to pay attention next time I quilt a quilt with W&N/W&W to see how much it shrinks :)

And speaking of quilting.......... WOW, was this a bear to quilt on my sewing machine!  It was basted for a month while I worked up the courage......  I could not decide how to quilt it! AND I knew it was going to be a challenge because of the size.........  In the end, I decided to go with an overall swirl quilting design.  This is the first time I've quilted a quilt with this design, and I do love the texture it gave it!  And 87''x87'' top is definitely at the TOP of the size limit for quilting on my machine though!  Anything larger and I will have to send out to be quilted on a longarm.  I am so glad to have finished it and now I am setting it aside for a wedding present :)

And now, pics of the post-washed crinkly yumminess! :) 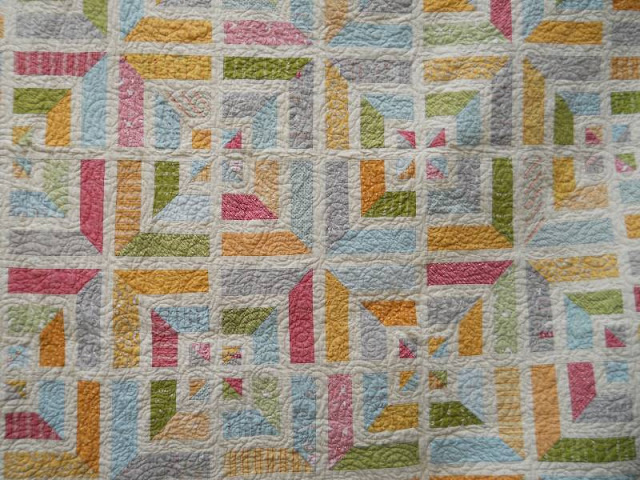 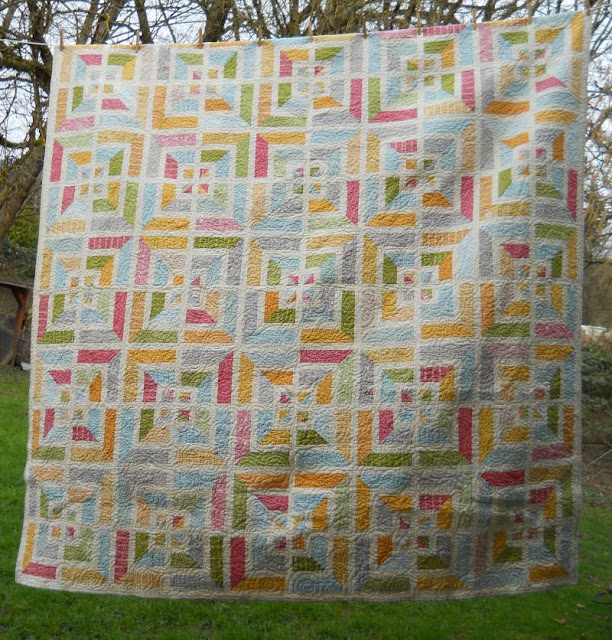 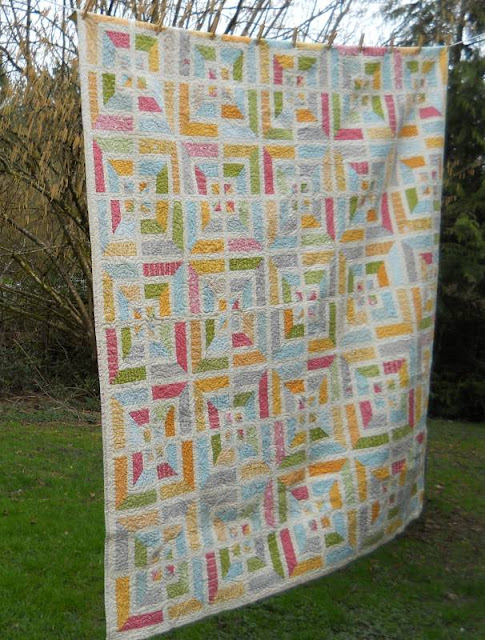 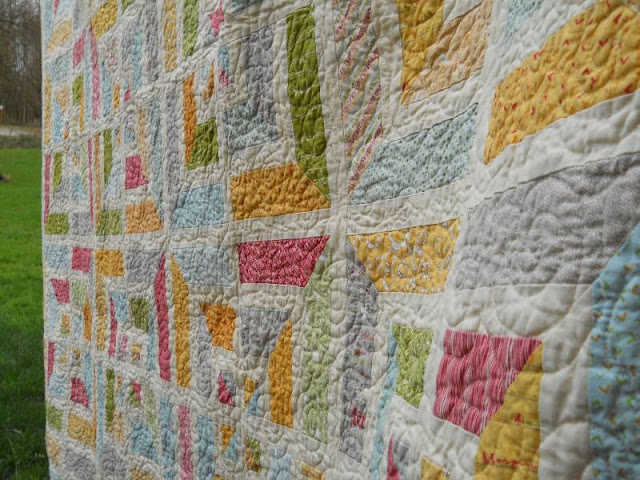 a finish and a baby quilt

I am happy to say that I have a new finish to share -  not today, but I promise soon!
It has to do with this lovely stack of fabrics from Moda :) 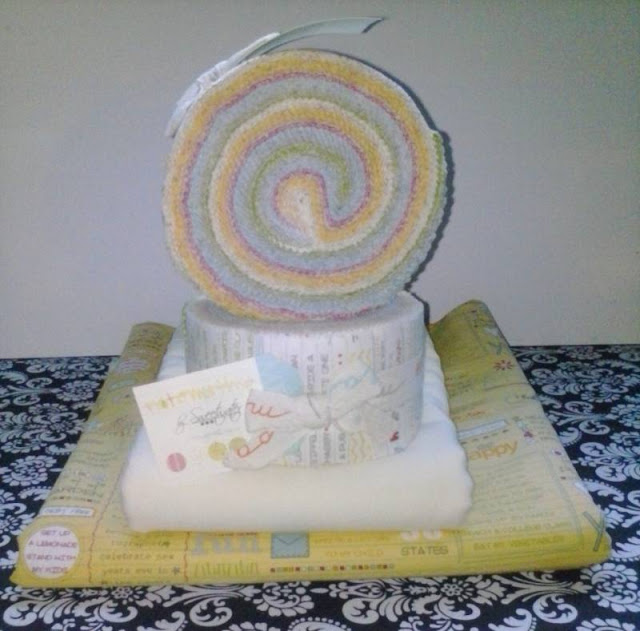 I have also started a new baby quilt for a baby in the 'family'.  I say 'family' because the baby is actually my son's best friends baby.  They have been friends since they were 3, so he is like another son to me. 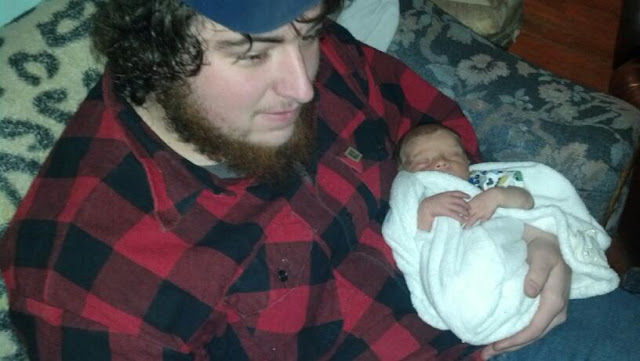 So, I have started a pinwheel baby quilt - my favorite baby quilt pattern ever! 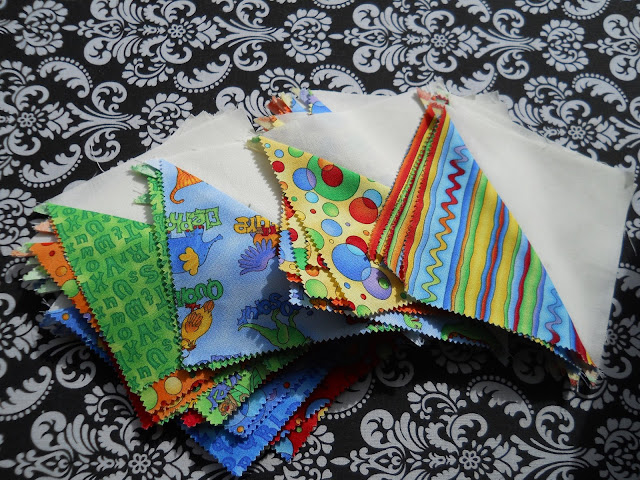 I have only duplicated two quilt patterns before that I can recall - one is the log cabin, and second is this pinwheel baby quilt.  I think I've made 3 of them before, so this will be the 4th.  They come together quickly.  I think this one I'll back in minky, mmmmmm......

Including some Wee Play (SOLD - I may regret that one!) 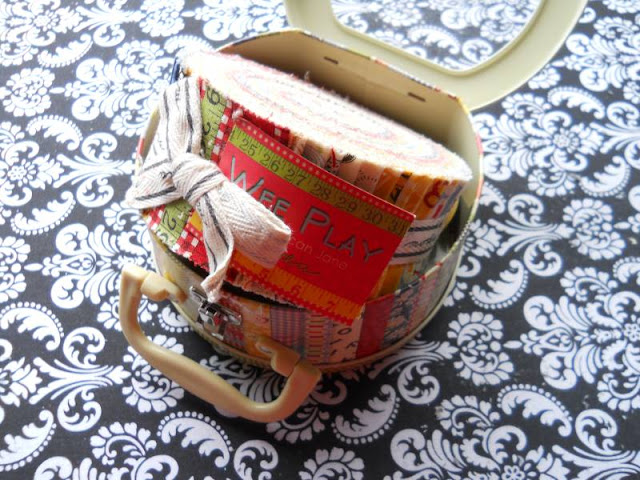 And some Hello Betty (may regret that one too!) 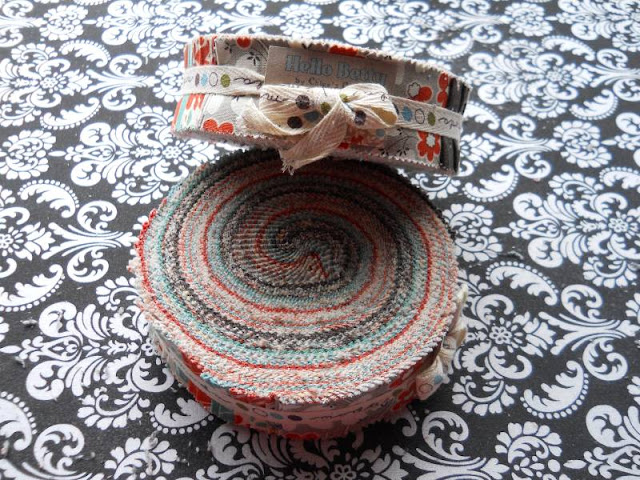 I finished up the orphan block and made it into a nice big pillow :) 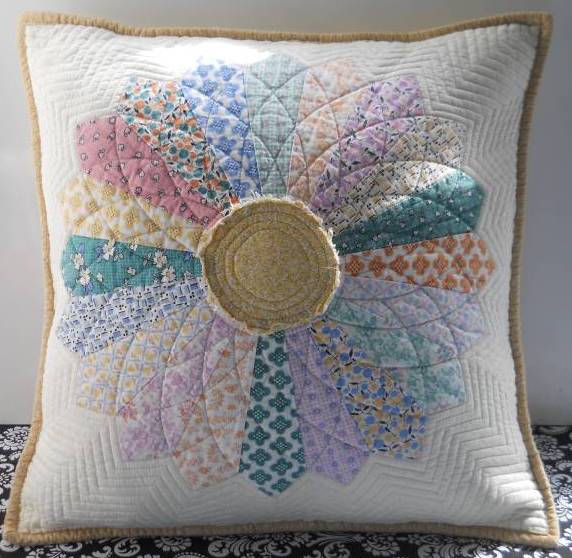 I had some leftover squares I had used in the quilt for a pieced sashing - and used them for a pieced backing for the pillow :) 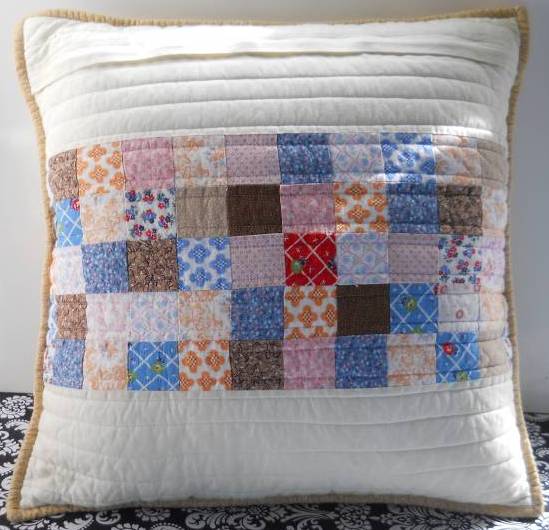 Still totally in love with the quilting on the dresden blades :)

In my cleaning spree, I came across this orphan dresden plate that I hand pieced for an all-hand-pieced-and-quilted quilt (that is still in the quilting phase).  So, I decided to turn it into a pillow cover, and here is the top all quilted and ready to be joined with a backing :)  I machine appliqued the block onto the background, then machine quilted it. 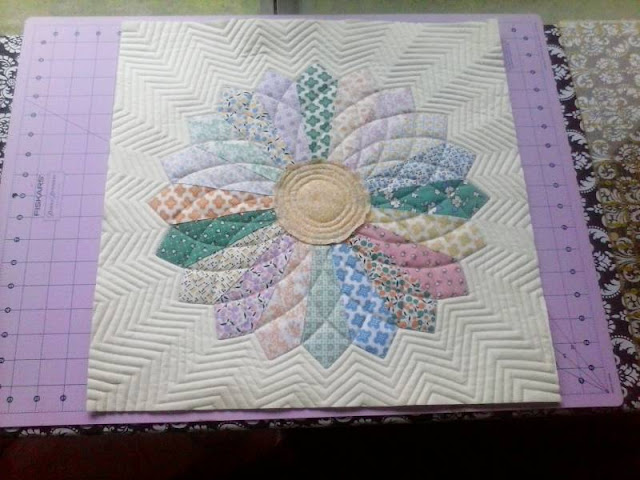 I just love how the quilting turned out ::VBG::  I used double batting in hopes that the quilting would really stand out and it did make a difference.

I am undecided about the center.  I left the center raw-edge, but I am not sure I like the concentric quilting in the center or if I should keep going on it, or pick it out and try something else......

blast from the past

Well, I have not been very productive lately in the quilt department.......  I had a home repair project that could not wait.  Our tub got a crack in it, and I wanted to have to use the boys' shower as little as possible, so I knew it needed replaced immediately.  Which actually meant more than I had planned.  We decided to put in a walk-in shower instead of a tub/shower - and then we gained space for a built-in cabinet for linen/storage.  But, that also meant moving plumbing (drains AND supply).  Of the many hats I wear, now I can say I am a plumber too, LOL.  Hubby's only contribution was helping me haul the new shower in the house, and crimping the new crimp rings on the supply lines (I wasn't strong enough because of the tennis elbow on my left arm, booo).  He has an excuse though.  He had the flu.  Which he gave to me, UGH.  Luckily the shower was done by the time I came down with it though.  It will definitely be nice to have that storage I've gained from going from tub to shower, but now I need to build a cabinet!  That can wait for a while though......

Anyhow, I had to tear apart my closet to get to the plumbing in the wall for the new shower, so I went through stuff as I put it back in and came across this quilt top :) 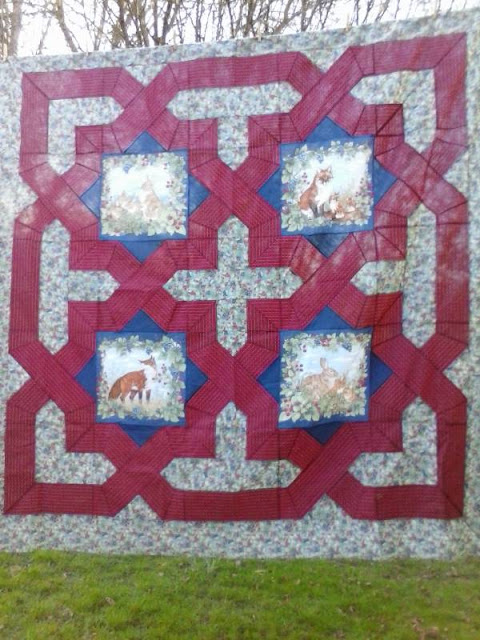 I do believe I had intended this quilt to be for my oldest son when he had to give up the toddler bed (so I could use the mattress for the crib again).  I'm thinking at 21 years old, he won't want it now, LOL.  Oh well, it is a nice reminder of the times :) 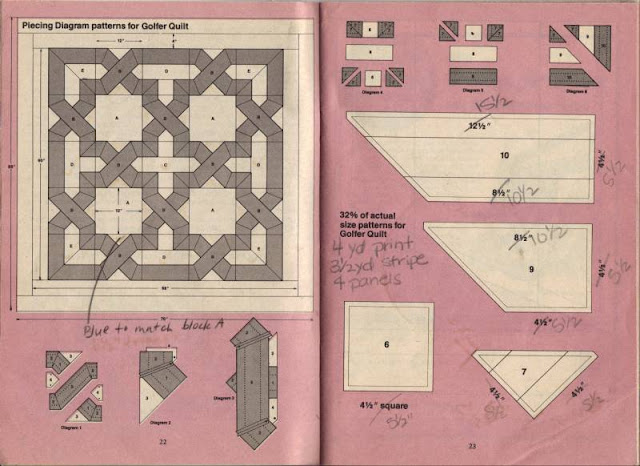 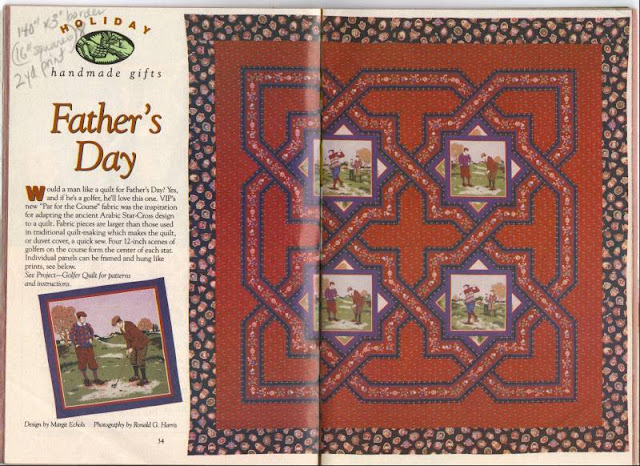 Evidently I adjusted the pattern to suit the panels I got.  I should have measured the quilt top, but it's somewhere around 70-80'' square.  A good size quilt, but not massive.  Small enough I can quilt it on my sewing machine.  It will be next in line after I get my MBS quilt done :)

Posted by Cascade Quilts at 6:59 PM No comments: